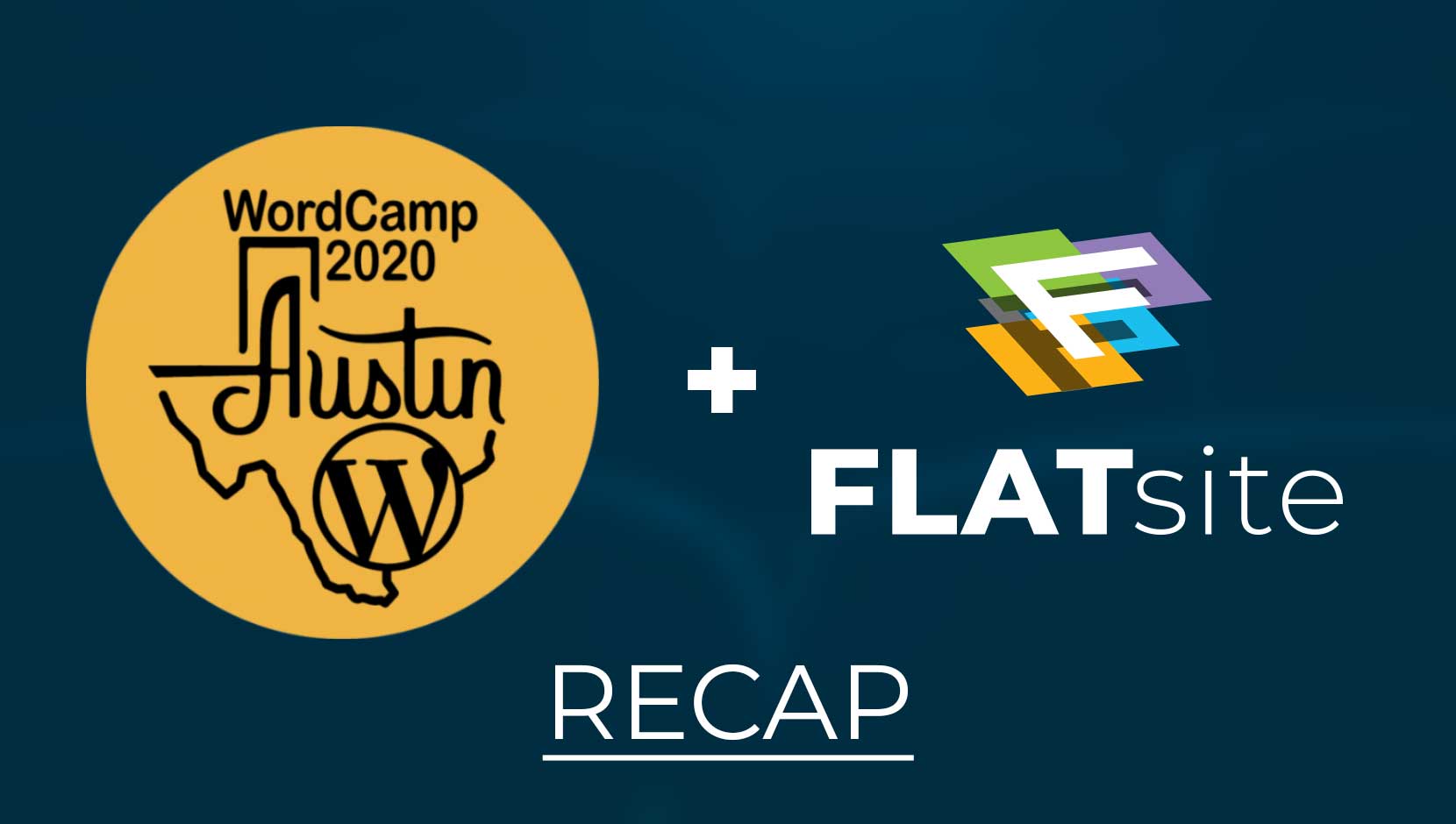 We were really looking forward to WordCamp Austin this year. WordCamp Austin is such a uniquely warm, electric WordPress conference that we were intrigued to see how the coordinators would translate that to a virtual platform. (A lot of the fun of WordCamp comes from laughing and talking with other attendees between sets.)

We had so much fun talking to all of you and giving you the secret discount code. (Did you miss it? Not to worry – for a limited time only, you can still get  50% off all FLATsite plans for a year!)

The organisers of WordCamp Austin knocked this year’s event right out of the park.

WordCamp is a WordPress conference that’s organised by WordPress communities all over the world! It’s a great way to meet new people and to talk to WordPress experts who share your passion for creating websites. Each WordCamp has a slightly different flair depending on where it’s held, and WordCamp Austin is a famously warm and musical event.

Why was special about this year’s WordCamp Austin?

There were so many reasons to look forward to WordCamp Austin this year, but the most obvious change was the new format. This year, WordCamp Austin was a virtual event, which was designed to bring the WordPress community together even though we’ve all been forced to be socially distant. Austin is the music capital of the world, and Austin natives are renowned for their creativity and out-of-the-box thinking, so figuring out how to translate an in-person conference to a virtual platform is just the kind of challenge that we figured Austin natives would embrace.

The coordinators were super excited about the chance to use Mozilla Hubs to recreate the warmth and cheerful conversations that make WordCamp a uniquely rewarding conference. They also promised a digital after-party that we couldn’t wait to experience.

We were stoked to be there, because the coordinators truly delivered on their promise.

WordCamp Austin 2020 was a resounding success

Most people who knew about WordCamp Austin’s plan to use Mozilla Hubs thought it would feel like we were attending WordCamp via Zoom, but it was so much more interactive than that!

Through Mozilla Hubs, WordCamp Austin’s coordinators had users create personal avatars and attend sessions or network in their “hallway”. Using your keyboard and mouse, you walked around, mingled, and watched livestreams of the talks from each track. If listening to the live music was more you speed, you could use your avatar to do this, too. You could even use a VR headset to heighten the experience. This was a huge part of the reason why this virtual WordCamp Austin retained the warmth and camaraderie that WordCamp is so famous for. It wasn’t quite the same as attending WordCamp Austin in person, but it didn’t feel like a cardboard cutout of a substitute, either.

The coordinators went above and beyond to ensure that the event had the immersiveness of a well-designed video game, instead of the cold separation of a video chat. And the live musical interludes had the trademark cheerfulness we’ve come to expect of WordCamp Austin. What a great way to blend learning with fun!

Speaking of learning, the event wasn’t completely centered on networking. There was lots of great information, too.

The great talks at WordCamp Austin this year

This year, we had live site reviews, virtual musical performances, and a fascinating VR-style “hallway” track, but the talks at the conference were really rewarding, too. Talks included such enlightening topics as “Things Well-Meaning WordPress Developers do That Hurt SEO in 2020” (Dave Zimmerman), “Git Into the Groove – Moving from Freelance to Collaborative Workflow” (AmyJune HineLine), and “How to Increase Ecommerce Conversions” (Topher DeRosia).

We loved meeting you and talking to you about our new launch!

FLATsite’s Slack room worked seamlessly – not a hiccup in sight. We had a really good time talking with you about the strides you’re making with your WordPress websites and about our new launch.

FLATsite is a static site generator, and we just launched a serverless search plugin that works with all static websites – not just those created on our platform. It’s the #1 search plugin operating on serverless WordPress websites.

Our revolutionary serverless plugin helps you activate the WordPress search engine without using a database, and it was invigorating to talk to all of you about our recent innovation and about your own WordPress projects.

WordCamp Austin was a blast this year, and we’d like to take this time to thank the community for putting on a creative, entertaining, memorable event.

We can’t wait for the next WordCamp Austin!

What to Expect at WPFest 2021 Summit

Catch us at the Virtual WordCamp Austin

Close Menu
We could not find any results for your search. You can give it another try through the search form above.